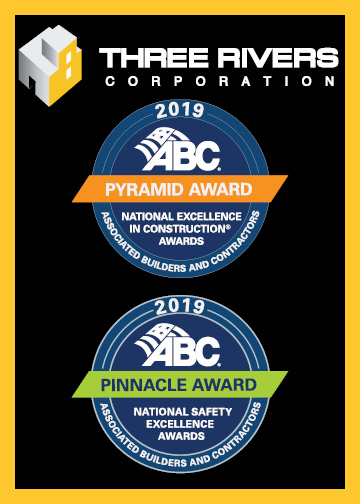 Associated Builders and Contractors (ABC) announced national award winners on Monday, April 6th. Three Rivers Corporation has earned a National Excellence in Construction Pyramid Award for the Whiting Forest Project General Contractor, Special Projects $10 to $100 million. TRC is also receiving the National Pinnacle Safety Award in recognition of safety performance judged to be exemplary by the ABC National Safety and Health Committee; both awards will be presented during ABC Convention 2020 in Nashville, Tennessee, on August 18th.

ABC’s Excellence in Construction program was designed to offer recognition for excellent performance in the merit shop construction field. These awards honor all members of the construction team: contractor, owner and design team. The competition is open to all construction projects completed by ABC members. Winning projects were selected based on complexity, attractiveness, unique challenges overcome, completion time, workmanship, safety, innovation, and cost.

The Whiting Forest Canopy Walk was a one of kind project TRC had the privilege to bring to life. Whiting Forest of Dow Gardens had a unique commitment to quality and safety throughout the planning, execution and delivery of this project that was truly remarkable. We had a fantastic team of highly skilled partners who were challenged and delivered a fantastic outcome,” said Jon Lynch President of Three Rivers Corporation.

Whiting Forest of Dow Gardens features 54 acres of woodlands, ponds, an apple orchard, meadows and streams. Guests of all ages and abilities are immersed in the forest on the nation’s longest canopy walk (1,400 feet long) soaring up to 40 feet above the ground. The Alden B. Dow-designed Whiting home now welcomes guests as a visitors center. Other features include a playground, apple orchard, Whiting Forest Cafe, restoration of Snake Creek, and two pedestrian bridges.

“The craftsmanship of Three Rivers Corporation and their hardworking employees and partners continues to raise the bar when it comes to how we define excellence in construction,” said 2020 ABC National Chair Tim Keating, owner and president of R.C. Stevens Construction Co. of Winter Garden, Florida. “It’s an honor to recognize these award winners for their respective commitments to building safely, on time and on budget, as well as contribute to the communities in which they work.”

“We are honored to achieve the National Excellence Pinnacle Safety award. Safety is part of who we are and receiving an award like this demonstrates that when our company works together, we can achieve great things. I am very proud of the women and men who earned this award and their commitment to safety at Three Rivers,” said Paul Crivac Safety Director of Three Rivers Corporation.

“Associated Builders and Contractors is proud to recognize Three Rivers Corporation for consistently raising the standards of safety in the construction industry,” said Tim Keating. “Their dedication to world-class safety performance and commitment to total human health is the gold standard of the merit shop construction industry.”